HomeBlogNewsFlickering or quiet lights: beware of the fun-fair pitfall 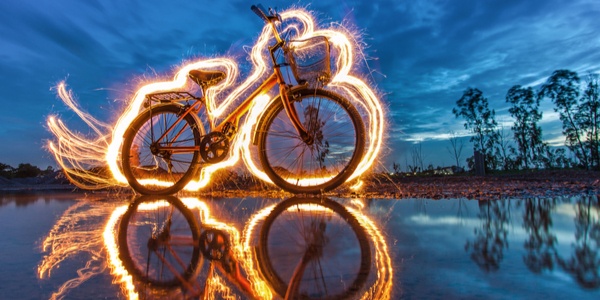 Flickering or quiet lights: beware of the fun-fair pitfall

It’s winter and it’s dark outside. In some cities and countries, this means the streets are flickering with bicycle lighting. Particularly children are equipped with fun fair-like lights. The more the merrier, parents believe when it comes to lighting. But in early December, the Dutch police force issued a warning: parents who were concerned about their children’s wellbeing were wise to tone down the lighting. Why? Well, even though kids were more visible, everyone got distracted. The luminous hysteria that characterized the Dutch streets achieved the opposite of the intended effect. Which – you guessed it – brings us to Visual Management.

Nightclub versus old-school cyclist: who do you prefer?

Suppose you’re driving your car and two cyclists pop up in front of you. One has attached flickering lights to her wheel and jacket, which wouldn’t make her look bad in a hip nightclub. The other is more ‘old school’ with her white front light and red rear light. What would you, the car driver, think? Probably that the first dazzles you while the second helps you keep your eyes on the road. Because she is not a fairground attraction.

Want results? Don’t turn your office into a fun fair!

The moral of the story: don’t turn your office into a fun fair! Before sharing information, you should determine whether it’s truly valuable to employees on the work floor. Be very, very critical when doing so. Don’t overwhelm them with brand-new data that lack any kind of background information. Don’t flood them with unexpected news that’s not actionable. Don’t surge them with an ocean of data which isn’t relevant to their tasks at hand.

We’ve said it before and we’ll say it again: less is more. You don’t want to distract your employees with the office equivalent of flickering bicycle lighting. It will cause harm rather than prevent it. Beware of the fun-fair pitfall. The less information you share, the more people can do with it!

Want to explore your Visual Management opportunities? Please don’t hesitate to contact us. We’d be happy to perform a Quick Scan and discuss your information sharing strategy.

We send you an e-mail when a new blog is posted.

Thank you for registering. You will receive an e-mail to confirm your registration.